The "Beppu Hatto" are the 8 onsen districts that make up the city of Beppu as a whole.
Within these 8 districts combined there are almost 100 onsen that offer hot baths, sand baths, mud baths, steam baths, and steamed cuisine.  The onsen range in quality, size, and price - from small, cheap, rundown shacks to grand halls with waterfalls and laser light shows.

Tourists from all over the world come to the city all year round just for the onsen.  If you feel like challenging yourself, you can participate in the spa passport challenge to collect stamps by visiting the different approved onsens in town.  As you reach different levels, you can claim different towels to proclaim your knowledge of and enthusiasm for Beppu onsen. 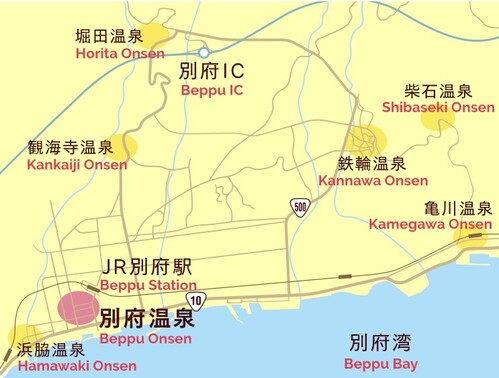 Beppu District
This district incorporates the main downtown area of Beppu City and is the heart of the Beppu Hatto, and the main venue for the Beppu Hatto Onsen Festival every Spring. The Beppu onsen have a long history, and were even mentioned under the name 'Hayami-no-yu' in an old text called Iyokuni Fudoki (a record of the culture and geography of the Iyo Province) written back in the Nara period! (710-794).

The district's most popular onsen is Takegawara Onsen, a grand old building first founded in 1879 and reconstructed in 1938. It has a lobby with a high ceiling reminiscent of the Showa period (1926-1989) where you can sit and relax after bathing, and in addition to the various springs for bathing, there is also a sand bath.
Another notable onsen in this district is Kitahama Onsen (Termas), an onsen where you can wear a bathing suit! 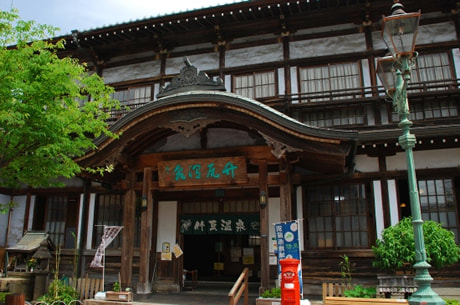 Hamawaki District
This is the true birthplace of Beppu Onsen as a whole. Its name comes from the hot springs that had sources near the beach ('hama'), and the boiling ('waku', changed to 'waki') water produced by those springs. In this area, there are quaint streets lined with old-fashioned inns, and you can spot traces of the red-light district from the Meiji (1868-1912) and Taisho (1912-1926) periods.

The main onsen in this area is Utopia Hamawaki, a multipurpose sanatorium based on a European Kurhaus (spa house) that was built in 1991. It features various baths, including a bubble bath, gushing water bath, and a waterfall shower, and also has a relaxing Japanese-style lounge and a gym. 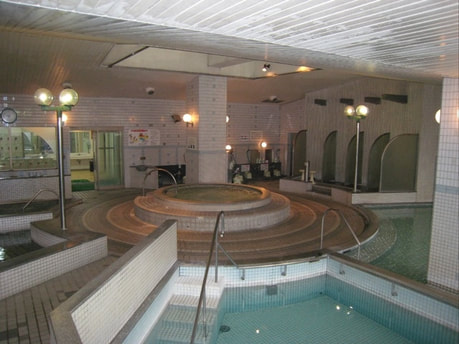 Kankaiji District
The hot springs here were discovered in the Kamakura period (1185-1333). Bungo Kokushi, a historical book from the Edo period (1603-1868) states that many people visited this district for its amazing scenery despite it being inconvenient to access in those times. This is because the Kankaiji district is at a high altitude (150m), meaning that it has the best views of Beppu out of all 8 Beppu Hatto. The Kankaiji district fell victim to a large fire in 1931 which destroyed 19 houses and one onsen, and it is perhaps because of this that Kankaiji does not have a municipal onsen.

It does, however, have the high class Suginoi Hotel, which is home to a waterpark, an indoor onsen, and a rooftop onsen. The waterpark is designed to look like an indoor beach, and has waterslides, and the rooftop onsen has a beautiful view of Beppu, as well as fountains and coloured lights at night. The waterpark and rooftop onsen can be enjoyed in bathing suits, however tattoos must be covered as part of the rules of the hotel (as this is a private establishment the allowance of tattoos for municipal onsen unfortunately does not apply here).

Horita District
This area was popular for its hot springs in the Edo period (1603-1868), and the springs here were formerly known as Tateishi-no-yu. Horita was a perfect stopping point for people travelling to Yufuin, Hita and Dazaifu, as they could relieve their fatigue in the abundant hot springs.

The new Horita Onsen facility was opened in 2003, and has a beautifully planted open air bath paved with rocks, where you can relax and enjoy the seasonal changes. There are also indoor baths, as well as a lounge to relax in after bathing. 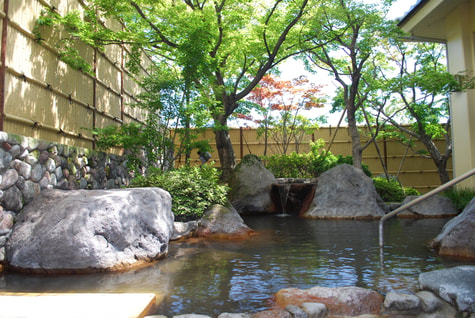 Kannawa District
This district is home to the symbolic 'yukemuri', the view of thick plumes of steam rising up above the whole city. The yukemuri in Beppu were designated as an Important Cultural Landscape as part of the Act for Protection of Cultural Properties. The Mushiyu (steam bath) area was founded by Ippen Shonin (a monk who also founded the Ji-shu branch of Pure Land Buddhism) and is now at the heart of the Kannawa district. With winding stone-paved streets and numerous charming shops and traditional inns, Kannawa is definitely a place worth visiting! 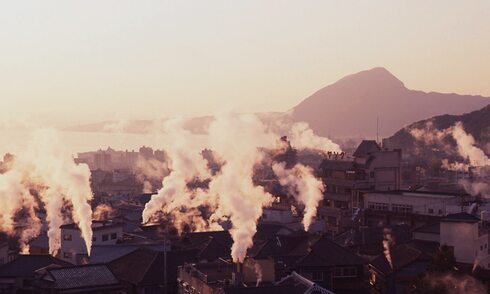 Shibaseki District
The name 'shibaseki' is derived from the fossils (seki) containing plant matter ('shiba' can mean 'brush' or 'firewood') found in the area in the Edo period (1603-1868). It is said that Emperor Daigo and Emperor Goreisen visited the onsen in this district to soak in the therapeutic waters.

This district only has one municipal onsen, but it contains two different temperature baths, an open-air bath, a steam bath, and a family bath.  It has also been designated as a National Health Hot Spring Resort, along with that of Kannawa and Myoban. Shibaseki Onsen is a quiet, picturesque facility situated near a mountain stream and a pleasant woodland trail leading to Myoban Onsen (although the trail is currently closed due to damage from the large Kumamoto earthquake in 2017). 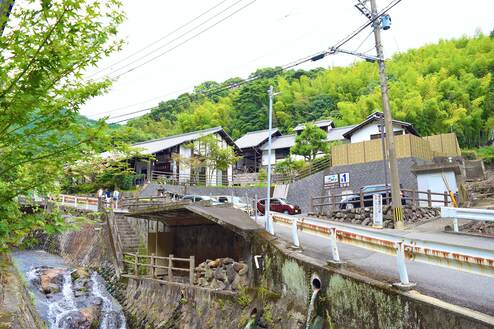 Kamegawa District
Kamegawa (using the kanji for 'turtle' and 'river') is an area by the sea which is home to Beppu's main fishing port. Kamegawa does of course have its own onsen where you can bathe in the hot spring water, but it's most famous for its natural sand baths. The sand bath is in Shoningahama Park, so-named because it was said to have been the first part of Kyushu that Ippen Shonin (a monk who founded the Ji-shu branch of Pure Land Buddhism) landed on. As you lie in the warm, geothermally-heated sand, you can look out onto Beppu Bay and enjoy the view. But you can only stay in the sand bath for 10 minutes or so, as the sand is heavier and hotter than you might think! Even so, it's a great way to relax and unwind, and is said to do wonders for aching muscles. 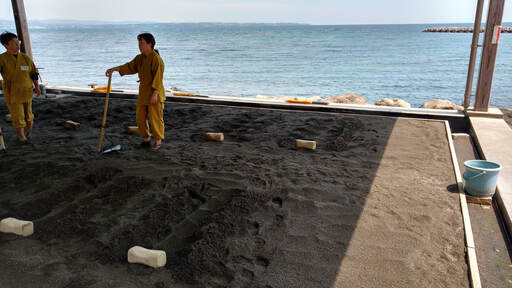 Myoban District
This district is distinctive in that it has mostly sulfuric springs, so the surrounding area does smell strongly, but the milky white water is said to be extremely good for the skin, as are the mineral deposits called 'yunohana' (literally 'hot water flowers') which can be made into bath salts. A famous site in Myoban is its 'yunohana goya' - the huts where these yunohana are collected. There is also a shop which sells egg-based foods made with eggs steamed in the geothermal steam from the springs, and also 'purin' (Japanese custard pudding) which can be eaten on its own or as part of a delicious parfait.

The hot spring itself, called Kakujyusen, is said to have been built to welcome the feudal lord Kirishima when he visited the area. The current building, however, was constructed in 1996, and has one bath each for men and women. There is also another municipal onsen in Myoban called Jizosen, but this one is apparently closed at present. 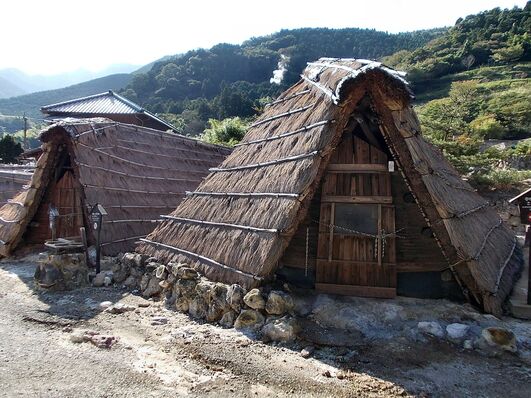