**Reminder: OitaJET is made by JETs, for JETs. We are not tax or visa specialists. The information provided is what we have found to be useful. Please always double check your information from an official tax/visa source, especially with specific questions. Thank you!

**Prefectural Advisors are not tax experts: however we would like to offer the following explanation of Residency Tax and how it is calculated. For more information please refer to the JET Programme General Information Handbook. For country specific information, please contact the taxation authorities in your home country.

What are residence taxes?

Residence taxes (also known as  住民税, じゅうみんぜい, Juminzei, Resident Taxes, Resident's Taxes, Local Inhabitant Tax and everything in between) are taxes levied by the municipality you live in.

JETs whose home countries do not have a tax treaty with Japan are liable for Residency Taxes from their first year onward.

How is residence tax calculated?

Residency Taxes in Japan are calculated based on income in each calendar year (January 1st to December 31st). The bill for these taxes is sent to the resident in June of the following calendar year. When paid, these taxes cover the current fiscal year (April 1st to March 31st).

The tax is 10% of your income earned in the previous calendar year. (This is comprised of 4% Prefectural Tax and 6% Municipal Tax for a total of 10%.)
*Each resident must also pay an additional \1,500 on their Residency Tax bill (\1,000 flat tax + \500 forestry and environment tax) 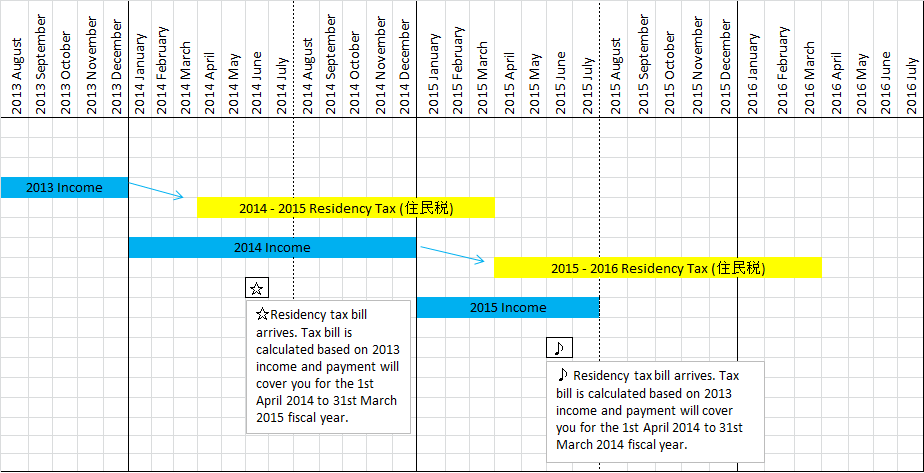 This fantastic infograph was created by CIR-PA Nicole (2011~2014)!
The chart begins in August 2013 for new JETs that arrived in July/August. Starting the following year, it is split into calendar years from January to December, with the blue income boxes indicating the JET income for that calendar year. The yellow boxes indicate the fiscal year from April to March, and show the period that your Residency Tax covers when you pay it. The blue arrows pointing to the yellow boxes are to show that the Residency Tax you pay is calculated based on income from the previous calendar year. The symbols in June of each year indicate the arrival of your Residency Tax bill.

When do I begin paying residence tax?

You will receive a tax bill in June that has been calculated based on the income you received during your time in Japan during the previous year. For first year JETs who are not  are exempt from paying residence tax, this means that your residence tax is calculated using only income received from July/August to December 31st. Therefore it is a relatively small bill. Second year JETs will have a bigger residency tax bill because this time it is calculated on one whole year of income.

How do I pay my residence tax?

After a JET participant’s Residency Tax bill arrives, they can choose to pay it in a lump sum or pay it in monthly installments (installments are roughly every two months). These installments can be paid at a convenience store, at the bank via a furikomi transfer, or through your school. JET Participants should speak with their supervisors for advice on how they should pay their bill.

What if I am not recontracting?

JETs who return to their home country shortly after completing their term on JET must submit a moving out form to their local Municipality Office. In doing so, they are removed from their local residency registry (住民票 juminhyou) and are therefore not a resident when Residency Tax is calculated on January 1st of the following year. They will not receive any more Residency Tax bills.

If a JET remains in Japan after completing their term on JET, and they are still listed on the residency registry (住民票 juminhyou) on January 1st of the following year, they will receive a bill for Residency Tax in the following June based on their income from January to July of their final year of JET and any additional income they earned after completing their term on JET.

If JETs relocate to a different area of Japan after completing their term on the JET Programme, they will be required to submit a moving out form to their current Municipality Office and a moving in form to their new Municipality Office. This will not relieve you of having to pay Residency Tax based on your income on your final 7-8 months on the JET Programme. You will still be liable for these taxes.

About how much should I expect to pay?

Residence tax bill arrives in JET's hands in June.
The residence tax is calculated on salary earned in the previous calendar year.
When the bill is paid, it covers JET for residency taxes for the current fiscal year (April 1st the year it is paid to March 31st the next year).