Most famous in: Beppu City 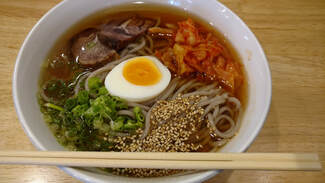 Beppu reimen is different from ramen and comes in two distinct types.

One type is the Japanese style reimen that is prevalent in Beppu specifically.
It has thicker noodles made of buckwheat flour, which are served in a chilled soy-based soup, usually topped with a few slices of seasoned roast beef, some kimchi made from cabbage, half a boiled egg, and perhaps some nori (dried seaweed sheets) and chopped spring onions. The noodles in this reimen are more chewy than the soba noodles made from the same flour, and are closer in thickness to spaghetti. 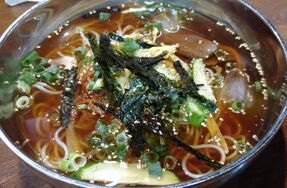 Another type of reimen originates from Korea, and so is more prevalent at yakiniku restaurants.
It has thinner noodles, and uses kimchi made with Chinese cabbage (hakusai). The broth also has a more kimchi-based flavour, and often has ice cubes placed in it to keep the dish perfectly chilled.