The Kunisaki Peninsula is in the North-Easternmost corner of Oita Prefecture. The peninsula runs along the sleepy coastline of the Seto Inland Sea which runs between Kyushu, Shikoku and Honshu. Whilst Kunisaki is designated as a city, it is made up of the four towns of Kunisaki, Musashi, Aki, and Kunimi. Aki town is closest geographically to Kitsuki City, whilst Kunimi town is geographically closest to Bungo Takada City.
The area is quite rural and has a wealth of nature, beaches, temples and shrines; most notably the beautiful Futago-Ji which is set in the mountains between Kunisaki town, Kunimi town and Takada City.

Following in the nationwide love of mascots and cute things, the mascot for the Kunisaki Peninsula is the very cute Kabosu lime Sakichikun (さきちくん)! 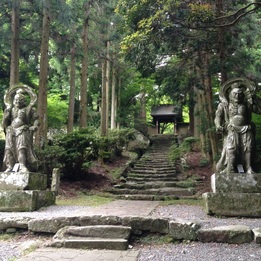 The SHS ALT will typically work at two SHS in the area, one is a short walk from their apartment in Kunisaki town, whilst the other in Kunimi town, which they will visit once a week, is a 20-30 minute drive. In a rare (but very welcome) case, the SHS ALT also visits the elementary and junior high schools on Himeshima island, with visits to the ES being monthly, whilst the JHS is only visited once a school term. This is an incredible experience to teach at all levels of the school system and to travel to the beautiful island of Himeshima.

The ES/SHS are split into two areas of the peninsula, with one ALT serving schools in the Aki and Musashi area, whilst the other will be at schools in Kunisaki and Kunimi. Their time will be divided between roughly 8 schools in each area, with one school serving as their base school. They will have a supervisor at the Kunisaki Board of Education which is located at Asto, in Kunisaki town. Some schools are located in rural locations of the peninsula and therefore it is imperative for each ALT to have a car to get around.

Kunisaki City as a whole is a relatively quiet and rural location with basic amenities such as banks, supermarkets and restaurants, but for wider entertainment and facilities you will need to travel slightly further afield. It is strongly recommended for each ALT to have a car, not only as a necessity to travel to and from work, but also as a means of entertaining oneself and travelling on the weekends.

Musashi ホタルまつり
This is an annual festival held around June which is dedicated to hotaru, or firefly watching. It`s held towards the mountains in Musashi town and there are festival foods and performances by local school and community groups from the late afternoon until the early evening. Once the sun sets and it becomes dark, people will gather to watch the fireflies along the river side, which is a spectacular sight!