The Jigoku Meguri is a tour of seven different hot springs too hot to bathe in (over 90°C/194°F!) that are instead nationally recognized for their scenic beauty.  There is a specially-decorated Jigoku Meguri bus (blue, with an oni face and small horns on the front) that you can take to get to the hells, but there are also normal buses that go there. 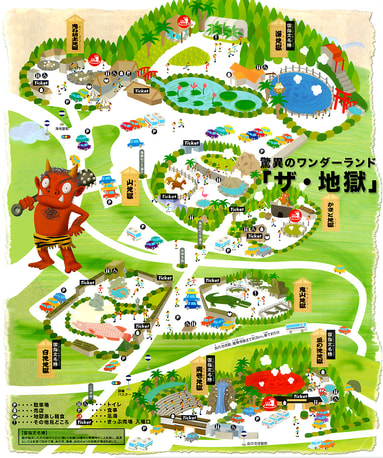 Booklets of tour tickets - including one ticket for each hell - can be bought at any one of the hells.

You may notice that there are in fact 8 hells on the map shown to the right, but this is because Yama Jigoku, which is not an official Beppu Jigoku and therefore not included in the purchaseable ticket booklet, is included in this map. As Yama Jigoku includes a small zoo, it could be that it was not given official status/its status was rescinded due to the less-than-ideal conditions the animals are kept in. However, a couple of the other hells (Shiraike and Oniyama) also keep animals (large fish and alligators, respectively) in questionable conditions and visitors may want to avoid those if they feel strongly about it. If this is the case, you can purchase separate tickets for each of the hells you do want to go to rather than buying the combined ticket booklet.